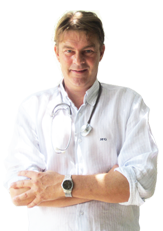 Long ago, in my childhood, my parents taught me that I had to brush my teeth properly. If you polished well you did not get cavities. It was the time of the fluoride tablets, everything seemed to be aimed at preventing cavities in our teeth. And rightly so, if only because the school dentists were not the most gentle in those days.

A year or 20 later, I had just started my first job in Leiden, I became acquainted with another aspect of the teeth. I bit down on a piece of bone hiding in a very dubious meat salad, splitting a molar down the middle. “I’ll have to pull that molar out”, said my Leiden dentist.  My colleague and roommate at work had other ideas and said “Go to my brother in Amsterdam, he will save that tooth”.

No sooner said than done, thanks to some ingenious tinkering with screws, my molar was saved in the big city, and I had not the slightest pain! I thanked the friendly and proficient dentist and asked him when I could come back for a check-up. “First make an appointment with the dental hygienist” he said, “that is more important in the long term for your teeth than saving this one tooth”. 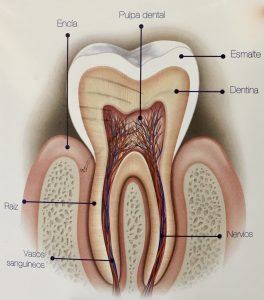 Smoking and bad dental hygiene are the main risk factors for developing periodontitis. The periodontium is formed by the tissues around the tooth: the gums, the outer layer of the  root, the inner lining of the jaw bone in which the tooth is embedded, and the ligament that anchors the  root to the jaw bone. If only the gums are affected, it is called gingivitis. The inflammation is the result of the growth of bacteria (plaque) on the teeth. 500 different types of bacteria can occur in plaques. As this  continues to grow downwards, a “pocket” develops between gums (gingiva / “Encia”) and tooth. The chronic inflammation in this pocket leads to stimulation of bone-resorbing cells. The pocket and the bone loss in the adjacent bone eventually ensure that the tooth is no longer properly secured in the jaw and falls out. More than 50% of the adult world population has periodontitis to a greater or lesser extent. 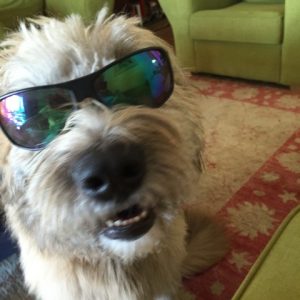 My teeth and gums are being scraped and scratched with a hook in a very rough manner. Ouch, ouch, ouch, I think with a grimace of pain on my face. “Is it sensitive? Well, that comes from all that smoking.  I can’t really get all that tar deposits off your teeth. Look, if I touch your gums here and here and here, it will bleed right away. Gingivitis. And you also have several deep pockets, one of 6 millimetres. I will leave it for today, just make an appointment for about 3 weeks time, then I’ll do the rest. And  you should stop smoking”. Shame faced and feeling like  a naughty boy, I left the building without making an appointment. It would take another 20 years before I would see a dental hygienist again.

The harmful bacteria in our mouth can naturally end up elsewhere in our body. Via inhalation to the lungs, with the food to the gastrointestinal tract and via the bloodstream to the vessels. Bacteria that typically occur in the oral cavity are shown for example, in fatty plaques (arteriosclerosis / arteriosclerosis), particularly in the neck and coronary arteries where they can therefore influence the development of brain and heart attacks. Substances that are released during the inflammatory reaction in the mouth can also have harmful effects elsewhere in the body. For example, there  seems to be a relationship between periodontitis and osteoporosis (brittle bones). Very recently (January 2019) it was shown that bacteria (P. Gingivali) that cause inflammation of the gums in people with periodontitis are also found in the brain. These bacteria may play a role in the development of dementia. 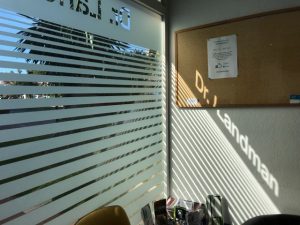 For the last 10 years, I go to the dental hygienist, Alice, a german lady, very “gründlich” and very friendly. And never the slightest discomfort. I do not mind the half hour drive to Marbella twice a year. Because, as my dentist tells me:  brushing, toothpicks or flossing and a visit every six months to the hygienist “keeps the doctor away” …